One large issue that I encounter in development with machine learning is the need to structure our data on disk in a way that we can load into Scikit-Learn in a repeatable fashion for continued analysis. My proposal is to use the sklearn.datasets.base.Bunch object to load the data into data and target attributes respectively, similar to how Scikit-Learn’s toy datasets are structured. Using this object to manage our data will mirror the native API and allow us to easily copy and paste code that demonstrates classifiers and techniques with the built in datasets. Importantly, this API will also allow us to communicate to other developers and our future-selves exactly how to use the data.

Moreover, we need to be able to structure more and varied datasets as most projects aren’t dedicated to building a single classifier, but rather lots of them. Data is extracted and written to disk through SQL queries, then models are written back into the database. All of these fixtures (for building models) as well as the extraction method, and meta data need to be versioned so that we can have a repeatable process (for science). The workflow is as follows: 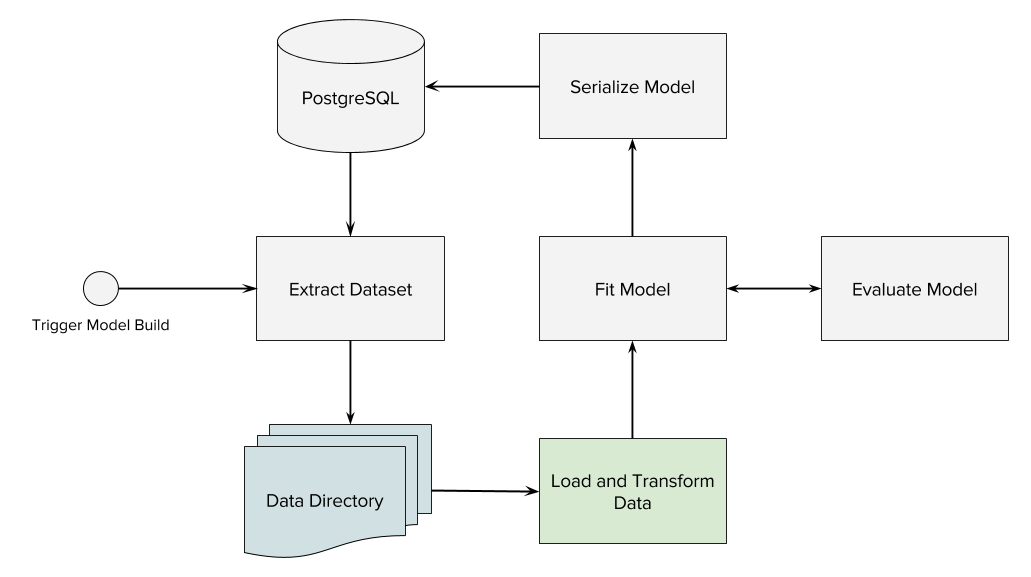 This post is largely concerned with the “Data Directory” and the “Load and Transform Data” highlighted processes in the flow chart. The first step is to structure a fixtures directory with our data code. The fixtures directory will contain named subdirectories where each name is related to a dataset we want to load. These directories will contain the following files.

A very simple project will therefore have a fixtures directory that looks like:

Dataset utilities code should know about this directory and how to access it by using paths relative to the source code and environment variables as follows:

The get_data_home variable looks for the root directory of the fixtures, by accepting a passed in path, or by looking in the environment, finally defaulting to the project fixtures directory. Note that this function creates the directory if it doesn’t exist in order for automatic writes to go through without failing.

The Bunch object in Scikit-Learn is simply a dictionary that exposes dictionary keys as properties so that you can access them with dot notation. This by itself isn’t particularly useful, but let’s look at how the toy datasets are structured:

We can see that the bunch object keeps track of the primary matrix (usually labeled X) in the data attribute and the targets (usually called y) in the target attribute. Moreover, it shows a README with information about the dataset including citations in the DESCR property, as well as other information like names and images. We will create a similar load_data methodology to use in our projects.

Now that we have everything we need stored on disk, we can create a load_data function, which will accept the name of a dataset, and appropriately look it up using the structure above. Moreover, it extracts the data required for a Bunch object including extracting the target value from the first or last columns of the dataset and using the meta.json file for other important information.

The primary work of the load_data function is to locate the appropriate files on disk, given a root directory that’s passed in as an argument (if you saved your data in a different directory, you can modify the root to have it look in the right place). The meta data is included with the bunch, and is also used split the train and test datasets into data and target variables appropriately, such that we can pass them correctly to the Scikit-Learn fit and predict estimator methods.

Now we can create named aliases for specific datasets as follows:

And we have a system that looks and feels exactly like the datasets that Scikit-Learn ships with.